Note: The details in this account and in these images may be offensive or frightening. Discretion and discussion are advised for classroom use.

At around 2:00 p.m., members of the gang rode over the Fourth Street bridge and took up positions along Division Street and Bridge Square. Frank James, Charlie Pitts, and Bob Younger entered the First National Bank. They jumped over the counter and ordered the bank employees to open the safe. Joseph Lee Heywood, the acting cashier, replied that the safe was locked and he could not open it. J. S. Allen, a hardware merchant, was the last person to leave the bank before the gang entered it. He realized the bank was being robbed and shouted, "Get your guns, boys, they're robbing the bank!" In response, Henry Wheeler, Anselm Manning, and others found weapons and began shooting at the rest of the gang guarding Division Street.

In the chaos, Wheeler killed Clell Miller from an upper level window across the street. Manning killed both Bob Younger’s horse and Bill Chadwell from behind the Scriver Building’s corner staircase. Bank employee Alonzo Bunker tried to escape and was shot in the shoulder, but he survived. Throughout the raid, Joseph Lee Heywood resisted the gang's efforts to get access to $15,000 stored in the First National Bank's safe. The gang finally realized they would not get the money and escaped with only $26.70 in spare change. As he was leaving the bank, Frank James turned and shot Heywood in the head. He died a few minutes later.

The people of Northfield were stunned. They had no idea the James-Younger Gang had just tried to rob their bank. They took photographs of the two dead robbers to identify them. They also formed a posse to capture the robbers who escaped. Volunteers came from all over the state and the governor issued a reward. At the Hanksa Slough near Madelia, members of the posse surrounded Cole, Jim, and Bob Younger as well as Charlie Pitts and forced them to surrender. (Jesse and Frank James had split off from the group days earlier and escaped back to Missouri.) Charlie Pitts was killed in the shootout and the Younger Brothers were captured. They pleaded guilty to the murder of Joseph Lee Heywood and were sentenced to life in prison. 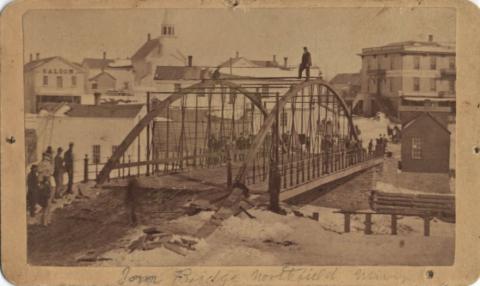 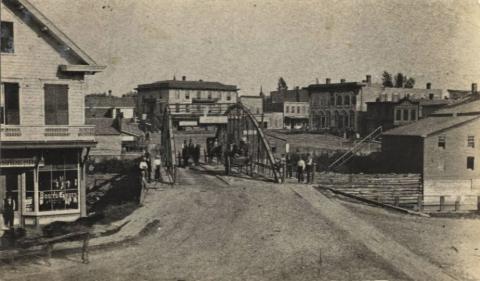 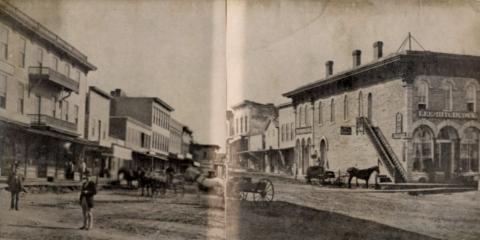 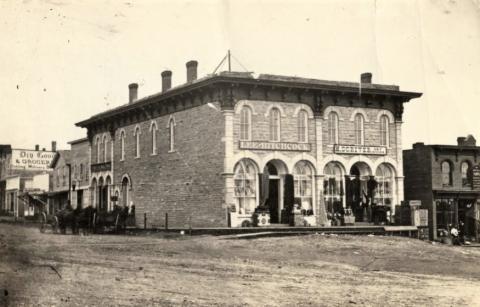 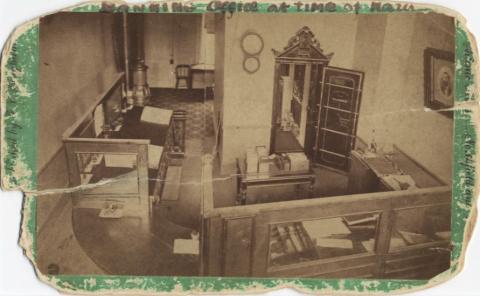 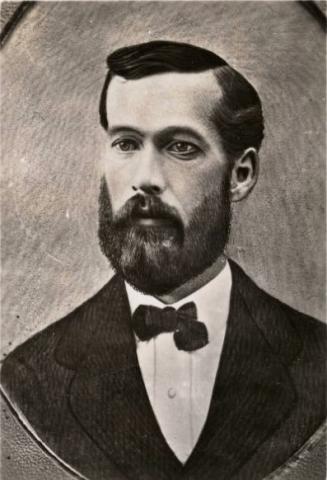 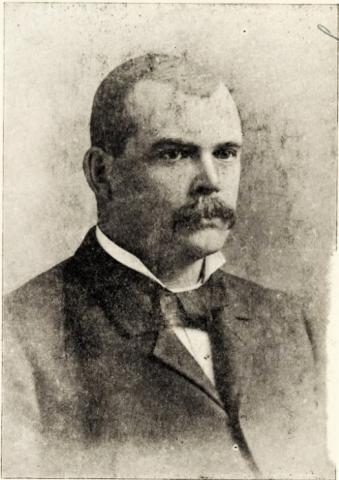 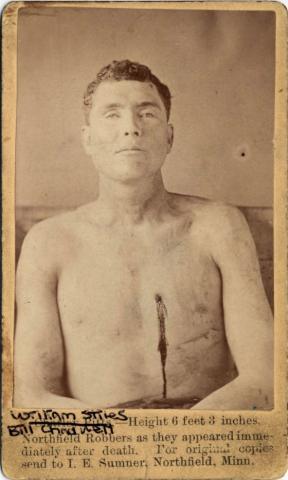 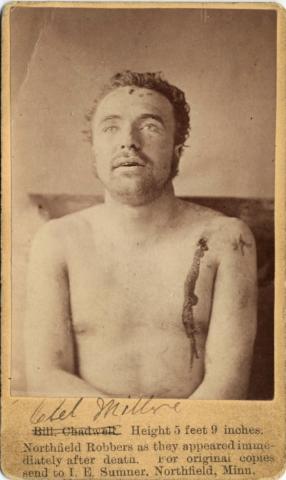 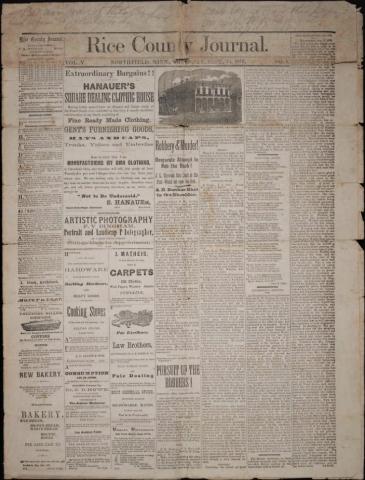 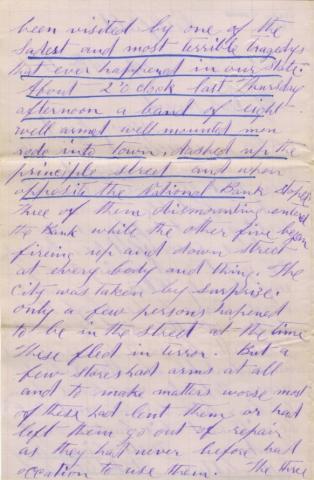 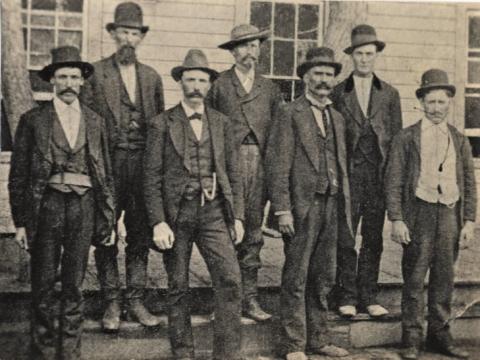 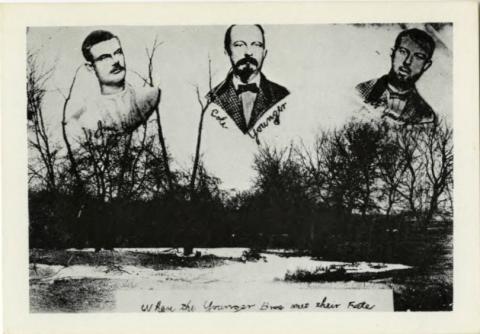 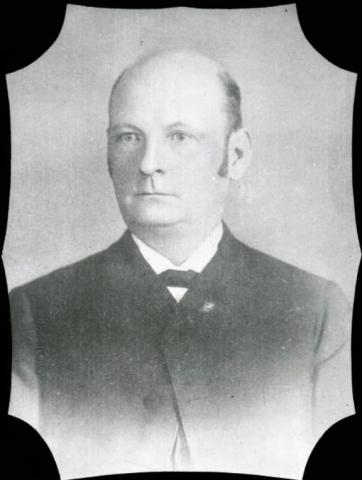 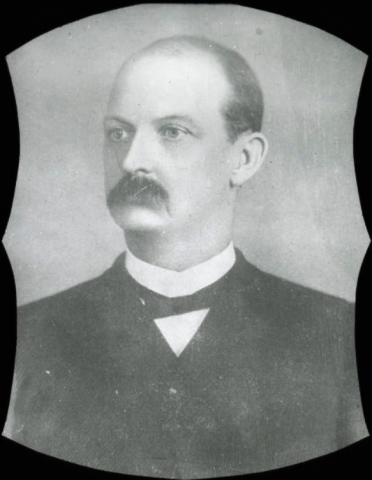 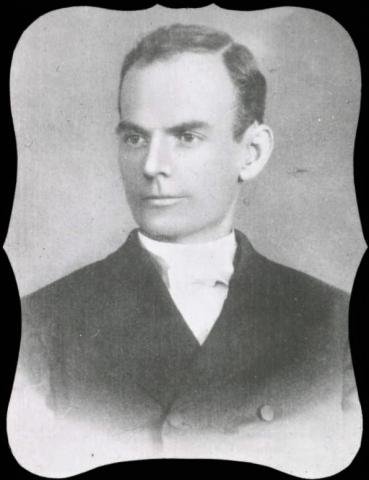 Portrait of Robert "Bob" Edwing Younger, a member of the James-Younger Gang

1. Consider what happened in the First National Bank on September 7, 1876. Acting cashier Joseph Lee Heywood made a decision not to open the bank safe for the robbers. Why did he refuse? What would you have done?

2. Why do you think a Missouri gang of ex-Confederate soldiers traveled all the way to Minnesota to rob a bank? Consider the aftereffects of the Civil War as you discuss.

3. There were many eyewitnesses to the robbery in Northfield that day. Read the transcript of Thomas Hughes' letter for his account. How does he describe the events of the day? Evaluate his tone, his language, and the details he chose to include.

4. Compare the Rice County Journal's newspaper account of the robbery with Hughes' letter . How are the two stories similar? How are they different?

5. Post-mortem photography—taking pictures of dead people—seems gross today, but it was quite common in the late 19th century. People often died before getting their picture taken, but their family still wanted a photograph to remember them by. Photographers like Northfield's Ira Sumner specialized in post-mortem photography, and he was the one who photographed Clell Miller and Bill Chadwell. Why do you think Mr. Sumner photographed these men? Does it help you understand the bank raid story better since you can see the robbers' faces? Why or why not?

6. What would have happened to the city of Northfield if the James-Younger Gang had succeeded? Most of the businesses and both colleges kept their money in the bank, and it was not insured.

7. The posse that finally caught the gang was called the Magnificent Seven . Other than their names, historians do not know very much about them or why they decided to hunt down the outlaws. Why do you think that is? Would you have joined the posse? Why or why not?

8. Even though he was a criminal, Jesse James is famous to this day in American popular culture. Countless books and movies have been made based loosely on his life – what we would call historical fiction. What is the difference between a historical account (for example, a newspaper article or eyewitness testimony from 1876) and historical fiction? Even if historical fiction might not be based completely on facts, can we still learn something about real events through them? Why or why not?

9. Imagine you were in Northfield on September 7, 1876 and you saw the raid on the First National Bank. Choose a position for your eyewitness testimony, such as standing on the street, in a store across from the bank, inside the bank itself, etc. Write down what you saw and what you did as if you were telling someone about it in a letter. Use descriptive words to convey how you felt - excited, scared, mad, amazed, etc. What details do you include? Then compare what you wrote with your classmates. How are your stories similar? How are they different? How do they help you understand what happened more fully?

10. Create a comic book based on the bank raid. Choose your main character - will it be a hero, an outlaw, a bystander, a child, or someone else? Draw pictures of the scenes and write dialogue between the characters. What information can you convey with pictures that you can't with words, and vice versa?