The Minneapolis Teamsters Strike of 1934, also known as the Minneapolis Truckers' Strike, was a pivotal event in both local and national labor history.  Minneapolis at the time was largely a non-union city.  Unions were gaining strength and numbers across the nation, but not in Minneapolis.  Local business leaders had been successful in keeping unions at bay by uniting under the Citizens’ Alliance, an organization committed to an “open shop” that would not require union membership as a condition of employment.

By May of 1934, General Drivers Local 574 of the international Brotherhood of Teamsters had organized members of the trucking industry into a union with 3000 members.  Employers refused to recognize the union and Local 574 called a strike. Violent clashes occurred between strikers and police in the Market District.  Special deputies were enlisted and on May 22, in a conflict known as the “Battle of Deputies Run,” two deputies were killed.  Governor Floyd B. Olson secured a truce, and an agreement between employers and Local 574 was signed on May 31.

By mid-June, Local 574 complained that employers were not abiding by the May 31 agreement, and on June 16 the workers agreed to another strike.  Employers used police escorts to move a truck convoy under the guise of delivering hospital supplies.  On July 20, a day known as “Bloody Friday,” police opened fire on strikers, wounding 67 and killing two. Governor Olson declared martial law and called in the National Guard to keep peace in the city.  In early August the National Guard raided the headquarters of Local 574 and arrested several Union leaders.  The Guard later raided the headquarters of the Citizens’ Alliance, confiscating evidence of plans to obstruct mediation.  A settlement was finally reached on August 22, 1934, one month after the second strike began.  The agreement secured for the Union a minimum wage, Union recognition, and the right of the Union to represent all of its members.  This victory for General Drivers Local 574 helped to create an environment for union support in Minneapolis, and paved the way for legislation such as the National Labor Relations Act of 1935, also known as the Wagner Act.

The Organizer, the daily strike bulletin of General Drivers Local 574, was the first daily newsletter of its kind. The Minnesota Digital Library has the entire collection of The Organizer, published from June 25 through October 17, 1934. 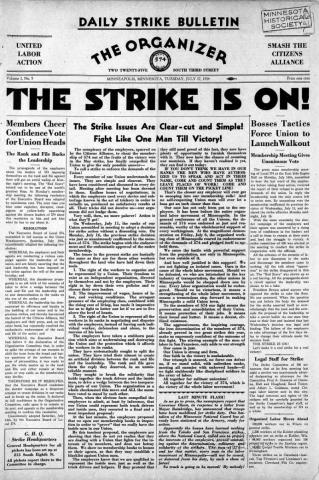 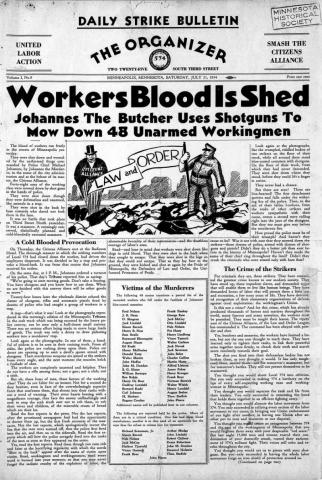 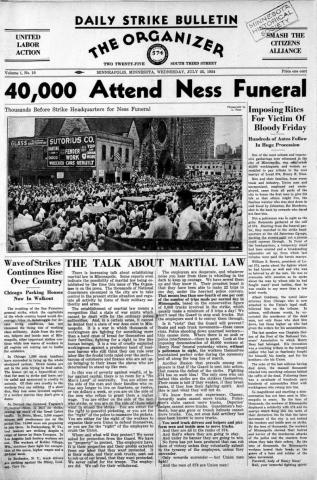 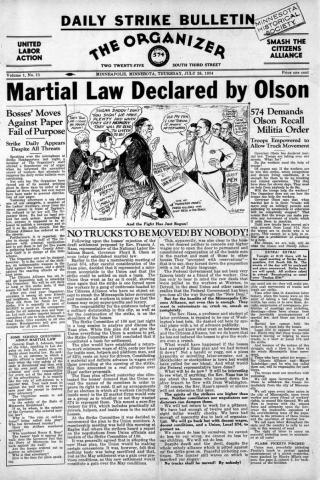 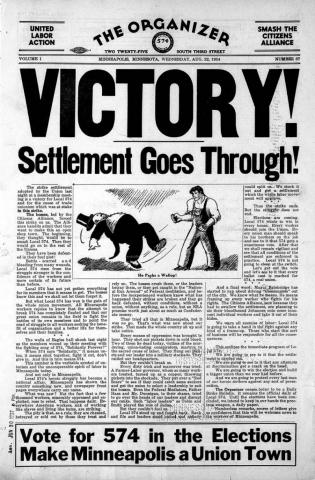 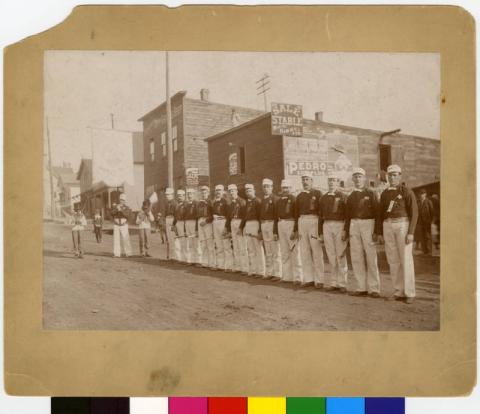 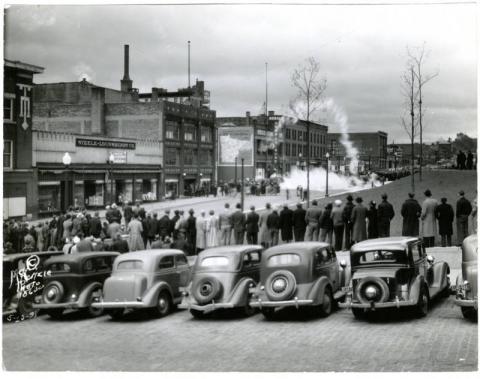 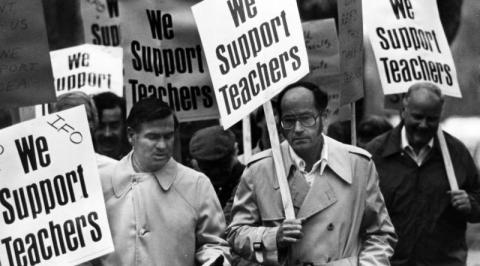 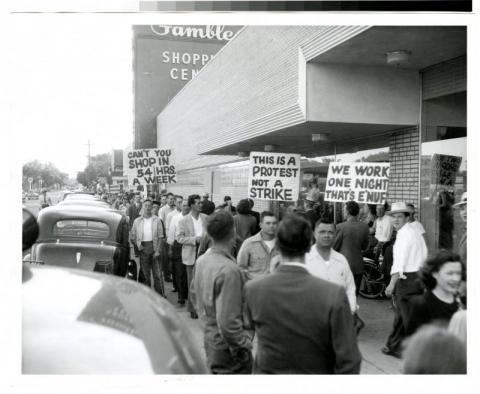 1. The Truckers’ Strike in Minneapolis occurred in 1934 at the height of the Great Depression. Unemployment in the United States at the time was over twenty percent. How do you think the economic situation might have played a role in the working conditions that led the truckers to strike?

2. Look at the illustrations on the front pages of The Organizer. Think about how various characters are depicted and whom they represent. For example, in the Victory newsletter dated August 22, the employer is depicted as a portly man in a suit and top hat, while the worker is dressed in overalls and appears young and very strong.  What does this tell you about the writers’ attitudes toward the different people involved in the conflict?

3. The photo on the front cover of the July 25 edition of The Organizer shows the funeral of Henry Ness, one of the strikers killed on “Bloody Friday.”  It was estimated that 40,000 people took part in the funeral procession.  Why would so many people choose to participate in this ceremony?

4. The photograph of the Theater Stage Hands shows a group of men in identical dress and carrying a union banner.  What would be the purpose of the union having a uniform?  What purpose do you imagine the union banner would serve?

5. What are the people in the photograph of the Labor Protest at Gambles Shopping Center protesting?  One of the signs states “This is a protest not a strike.”  What is the difference between a protest and a strike?  Why would these protesters want to make the distinction that they are not on strike?

6. Look at the photograph of the Newspaper Guild Strike in Duluth.  What is the atmosphere in this image?  Why do you think the police used tear gas in this situation?

8. Imagine you are a member of a group that is being treated unfairly.  Your organization might be a labor union, a student organization, a neighborhood group, or any other type of group with a common purpose.  How would your group stay informed and communicate with its members?  Design a newsletter for your organization.  What kind of information would be included in the newsletter?  How would the newsletter be delivered to the members of the organization?

9. Review the entire collection of The Organizer in MDL. Consider the purpose of the newsletter and the intention of the writers.  Answer the following questions: