Note: These trade cards contain offensive imagery and language. Discretion and discussion are advised for classroom use.

The second half of 19th-century America witnessed a boom in industrialization and urbanization. It was also a time when America experienced two more waves of mass immigration giving rise to greater diversity in population. Along with a tremendous increase in the variety of mass-produced goods, consumption, too, was on the rise. Consumers, then, became the targets of a new, cheaply-produced advertising medium, trade cards. These cards were small, usually ranging in size from approximately 2X4 to 3X5 inches. Often they included an image and promotional text which may have also included the business name and address. Widely-circulated and immensely-popular trade cards were freely given to any potential consumer or with a purchase. In fact, trade cards became so popular that some were collected and kept in scrapbooks.

The images included on the trade cards reflected the cultural roles and values of American life. In many cases these featured images of rural landscapes, floral arrangements, gleeful children, and pets. However, there were an equal number of trade cards that were derogatory, caricatured depictions of race, ethnicity, national identity, class, and gender, highlighting the anxiety and bigotry within white, Anglo-American society. And in these cases particularly, the popular trade cards not only reflected but also perpetuated insidious stereotypes. Even though these trade cards were exaggerated depictions, they also exhibited a sense of truth to the kind of treatment that these targeted groups endured. This primary source set is intended to provide context around these once-popular trade cards, to situate them historically, and inspire critical inquiry. 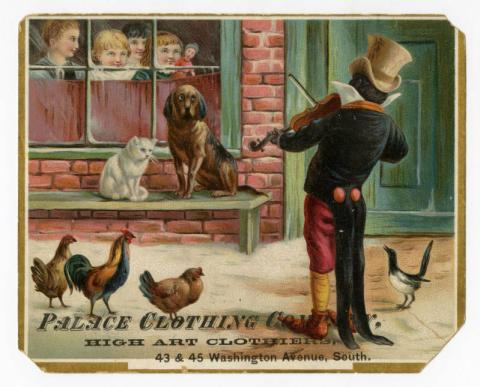 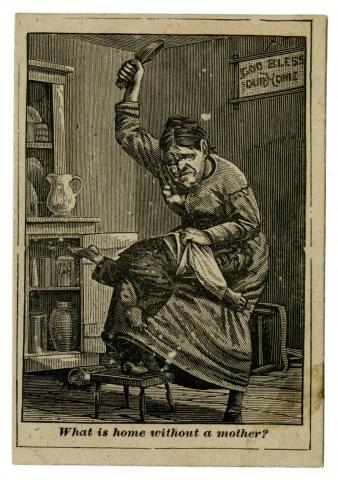 What is Home without a Mother?, Minneapolis, Minnesota
Image 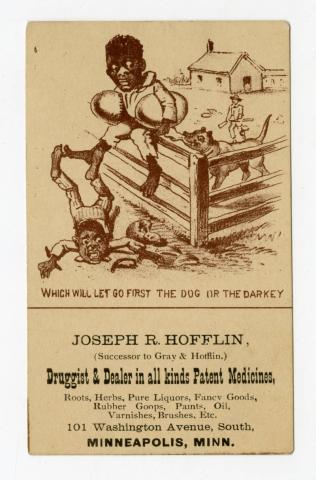 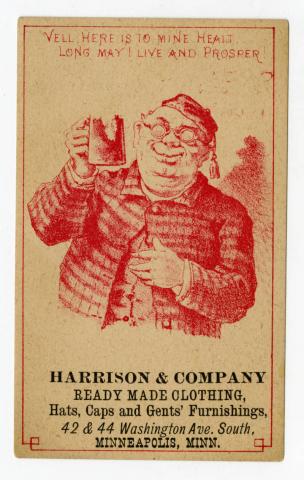 Vell, Here is to Mine Healt, Long May I Live and Prosper, Minneapolis, Minnesota
Image 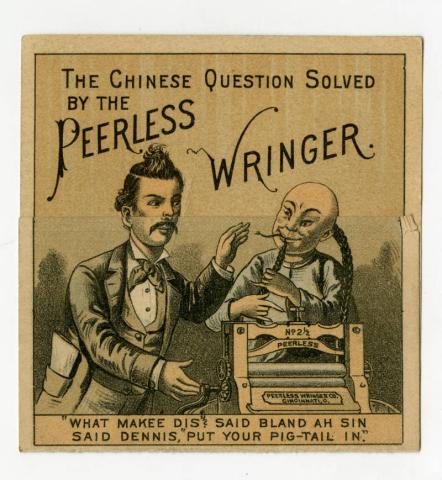 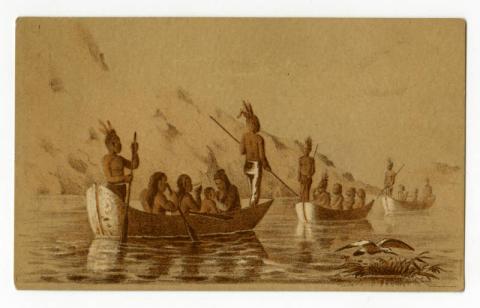 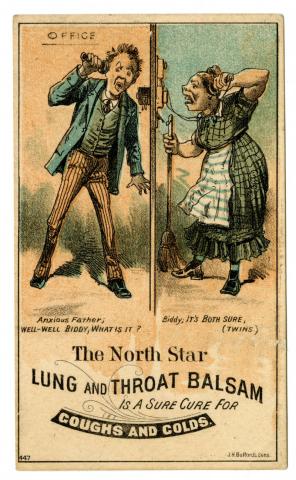 The North Star Lung and Throat Balsam is a Sure Cure for Coughs and Colds, Minneapolis, Minnesota
Image 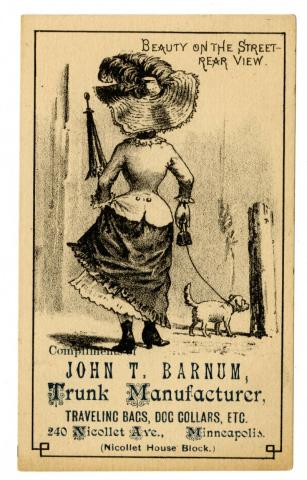 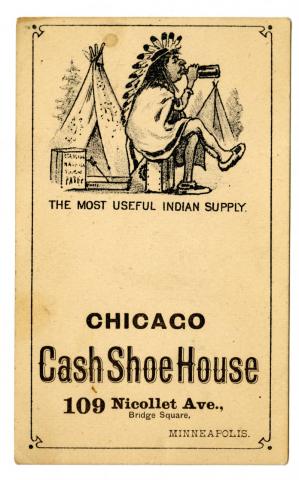 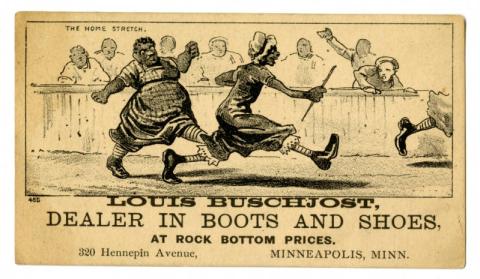 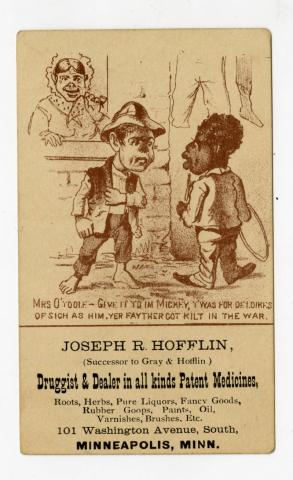 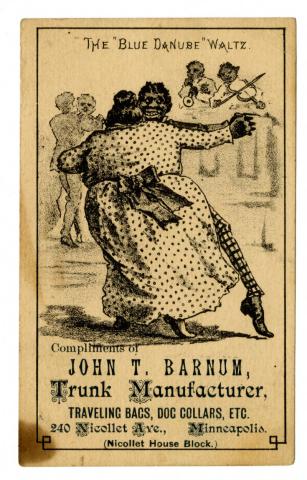 When you look at the trade cards in MDL, be sure to check if there is a back side too. Some have only one side, others have front and back sides, and one of them unfolds. Use the zoom-in tool to view subtle details in the images.

1. What product(s) were being advertised on these trade cards?

2. Who were the intended consumers?

3. Who was depicted on these trade cards?

4. Why did businesses use these stereotypes for advertising or to boost sales?

5. What similarities or differences do you see between the various racial, class, and gender depictions in this set of trade cards?

6. Look closely at the details of the images to uncover more subtle information about racial characteristics and discuss why these were used and what they say about American culture during this time.  How was the concept of "the other" being used? What were the coded messages about race and gender?

7. How is race, class, and gender constructed differently between the card, “Theft of a Watermelon,” and the card, “Two Young Girls Fishing?”  How do the images and language treat the children represented in the cards differently?

8. Cards “The Most Useful Indian Supply” and “Minneapolis Harvester Works” both depict Native Americans. What two opposing racial stereotypes do these cards draw upon?

9. How is class and gender constructed in the cards “What is home without a mother?” and “The North Star Lung and Throat Balsam.”

10. What racial stereotypes do the cards “The "Blue Danube" Waltz” and “Palace Clothing Company” share?  How are they alike and how are they different?

11. The two cards “Beauty on the Street” and “The "Blue Danube" Waltz” were used by the same company advertising the same product.  How are these two advertisements alike and different? What is the difference between the racial and gender depictions in each card?

12. Compare and contrast the depiction of women in “Beauty on the Street,” “The North Star Lung and Throat Balsam,” “What is home without a mother?,” and “The Home Stretch.”

13. Both cards, “Vell, Here is to Mine Healt, Long May I Live and Prosper” and “The Chinese Question Solved By the Peerless Wringer” point to large immigrant populations during second half of the 19th century.  In what ways do these two cards differ in their racial discrimination and in what ways are they similar?  To what historical social issue(s) and legislation during that time are these cards are referring?  What is the symbolic significance of the product being sold in "The Chinese Question Solved by Peerless Wringer?"

14. Given that these trade cards were used by businesses in Minneapolis, what does that tell us about racism in America and in Minnesota during the second half of the 19th and early 20th centuries?

15. How do you see race, ethnicity, nationality, class, or gender being used in advertising and marketing today?  Can you think of negative as well as more positive, empowering examples?

16. Working in pairs or small groups, have students search for additional trade cards on the MDL site that depict racial, ethnic, national, gender, or class stereotypes.